Why even bother shooting with a tripod?  I take really pretty pictures  with my smartphone or point and shoot camera, both of which fit in my pocket!
Why shoot in HDR?  They don't even look like photos!
Why not compose the scene in-camera and then crop the scene to make a panorama or square composition?  Why go to all the trouble of photomerging?

What a great time I had in Salt Lake City!  I was recently there auditioning for the Metropolitan Opera National Council, Utah District Competition.  Although I didn't win, I had a great time and sang well.  I haven't spent much time in Northern Utah, so I wanted to take full advantage of being in such a beautiful area.  I was hoping to go skiing, but the lack of decent snow promised that the skiing wouldn't be as fun. So, I sought out photo-worthy places... and where better than Salt Lake?
After a looking on the map, I figured Antelope Island would be the best place to go to get a good view of the sunset... although some locals suggested that I wouldn't find the island all that beautiful.  Fortunately, I decided to listen to my gut, and made the short drive to Antelope Island State Park.  I arrived around 1:30pm, so I had plenty of time to explore the island.  The Island is rife with wildlife.  I saw numerous Bison, Birds of Prey, Rabbits, Coyotes, and Beavers.  And, because it was so cold, there weren't a lot of people on the island. 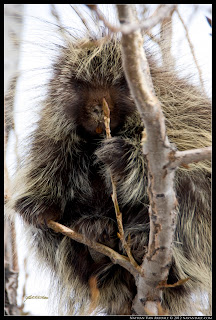 Needless to say, I really enjoyed what the island had to offer.  But, it was getting close to sunset, so I figured I'd make my way to White Rock Bay on the northwest side of the island.  I parked at the trailhead and made my way towards the shore, about a 20 minute walk.  I discovered why the bay was called White Rock Bay, as there were numerous boulders scattered along the shoreline.  These would make a perfect foreground, so I started looking for interesting compositions.
I was excited to have a good sunset, because the clouds overhead promised some dramatic colors.  But as I waited, the clouds shifted south, opening up the sky over the sun.  Bummer!  Oh well, I might as well stay and see what I get.  Then, right as the sun started settling on the horizon, some clouds moved back in and caught the spectacular light.  I made the best of the 30 minutes of changing light during the sunset, and captured a few nice compositions.
As usual, the scene before me was just too grand to capture with just one in-camera composition. So, I set up my compositions to photomerge in Photoshop.
Here's the Hows and Whys:
Really, the whys are pretty simple:
Q. Why even bother shooting with a tripod?  I take really pretty pictures  with my smartphone or point and shoot camera, both of which fit in my pocket!
A. Of course you take pretty pictures with your point-and-shoot or smartphone. That's what they're for, capturing a moment that you would otherwise miss.  Here's an image of the same scene I took with my Droid X smartphone with an 8 megapixel camera.  It got a lot of positive comments on Facebook when I uploaded it, and it is, indeed, a pretty image.  But, look closely and you'll notice that the detail is a bit washed in the mountains, and the foreground is very dark.  Also, the Highlights in the clouds are blown out on the right side of the frame, and the entire image is not very sharp.  The reason for a tripod is to steady the camera to ensure the sharpest image possible.  Typically, point-and-shoot cameras/smartphones photograph at a wide aperture (neighborhood of f4), which allows for faster shutter speeds, and decent instant portraits, but also a narrow field of focus.  When photographing landscapes, it is necessary to have a wide field of focus, and thus a narrower aperture (f18-f22).  This narrower aperture makes it necessary to have a slower shutter speed, in order to get a proper exposure... thus, requiring the use of a tripod.
Q. Why shoot in HDR?  They don't even look like photos!

A. Often times I am disgusted by the over-processing of HDR images I see on Flickr.  I don't even bother with those. But still, when non-photographers see an HDR image, one of their first responses is, "Oh Wow, is that a painting?" or, "That doesn't even look like a photo."  Well, they're right.  HDR images don't look like typical, one-exposure photos. People are used to seeing a photo-sensor's interpretation of the light-levels of a particular scene, which often times result in blown out areas of light and/or dark.  A High Dynamic Range image covers the light levels by more stops than a single exposure, so what we see in the image is closer to what the eye sees (if the processing is done right).  Now, I could get into a long discussion of artistic license when processing photos, and how often times nature photos look even better than real life in order to reflect the ideal... but I won't.  Below is an image of White Rock Bay taken at what would be considered a "proper" exposure for the midtones of the scene.
Obviously this is a viable option... if you just want to share a pretty image online.  But if you want to turn your image into a printed work of art, you should really be taking the utmost care in its processing, which means minimal tweaking.  When zoomed to 100%, any fill light over 25 creates weirdness in the image... and yes, that's a technical term. So, since we're shooting on a tripod, let's go ahead and set our Canon camera's Auto Exposure Bracketing (AEB) to -2, 0, +2.  And, using either our cameras self-timer remote, or our shutter release cable, we can capture the Midtones, Highlights, and Shadows exposures of the same scene.  At home, we can combine these images using Photomatix Pro to get this:
Now, this is a decent sunset image.  Pretty good reason for shooting in HDR, I think. But, the composition isn't quite as dynamic as the scene made me feel when I was there.
Q. Why not compose the scene in-camera and then crop the scene to make a panorama or square composition?  Why go to all the trouble of photomerging?
A. Really, there are a couple of reasons. First of all, I like a prominent, attention getting Foreground that leads the eye into the rest of the scene.  But, often times, in order to get the detail I want in the foreground, I have to sacrifice a lot of the background, including the sky.  The only feasible way to include the sky is to turn my camera on its vertical axis, which would then cut out the sides of the foreground.
Also, a single frame only has a certain amount of mega-pixels, meaning that by cropping the image into a panorama or other smaller composition, you're sacrificing all sorts of detail, and will never be satisfied with your prints (unless they're small prints, then you might). When you create a panorama or vertorama, you have a lot more pixels to work with, and thus larger printing options.
So, I will usually place my camera on its vertical axis and take a series of bracketed exposures, carefully moving each series about 1/3 to either side, allowing for an adequate amount of overlap for the photomerge feature in Photoshop.  With the Mud Flats image above, I started from the right to the left, carefully taking 6 sets of 3 bracketed exposures, processed each set using Photomatix Pro, and then combined the images in Photoshop.  With the top image, I again started from right to left, taking 3 sets of 3 bracketed exposures, and then moved the camera up 1/3 of the frame to include the sky, and took 3 sets of 3 bracketed exposures moving left to right... thus resulting in a square composition with a prominent foreground leading to a huge background.  Total processing time for each image was around 15 minutes.

I suppose this post was a little longer than normal, so I appreciate you reading.  I'll tell ya what, if you leave a comment, I will send you one of my 2012 Fine Art Calendars, free of charge... all you have to pay is the shipping.
Thanks for reading! Be well! :-)
Posted by About Me at 4:17 PM