Whiskey Skies, originally uploaded by navandale.
Spectacular sunset over the Oak Bottom arm of Whiskeytown Lake. This was my stop after leaving Redwood National Forest on my National Park trek. I wasn't actually expecting anything special to come from Whiskeytown National Park (in comparison to many of the other National Parks I have seen and would see). That thought was stoked by the fact that the waterfall that I had wanted to visit and photograph had all sorts of trail-construction.

On my approach to Whiskeytown through Willow Creek, I could tell that the sunset was going to be beautiful... But, I was surrounded by canyon walls, and really wanted a shot with Shasta Bally in the background. Well, as I exited the canyon and rounded a bend I saw this scene... I had to stop! Fortunately, there was a campground parking lot about 50 meters ahead. I pulled in, parked, and rushed to get my camera and tripod.

In my flip-flops I navigated the steep, thistle-covered bank to the shore-line. The shoreline didn't offer much in the way of foreground... all there was was a lonely rock far off to the side, which only offered one angle of view (lest I include the man-made embankment that made up the northwest shore).  I considered photographing the scene with just lake and sky, more of an exact mirror, but it just wasn't as interesting without something in the foreground.  So, I got my tripod folded wide open to allow for a nice low angle on the rock, and still see enough sky.  The only available angle from which to shoot the foreground, not get the man-made embankment, but still see the clouds and mountains required that I put the legs of my tripod in the water, and I squat in a smelly mud.  I took a series of shots as the light quickly changed, but this image was the first I captured, and the best of the evening.

The only way to capture the completeness of the scene was to shoot it as a panoramic. This is an HDR pano made from 4 horizontal frames. Each frame is an HDR image created from 3 RAW images using Photomatix Pro. Pano stitched in Photoshop.  Very little post processing was done to this image.  A little dust-spot stamping, unsharp mask, and noiseware standard in the sky.

Drinks, Snacks, and Violence... all in a Beautiful Day's Work

My recent trip to Yosemite Valley yielded some awesome photographic opportunities, as well as some unforgettable encounters.  Here's a couple images and anecdotes from that trip. 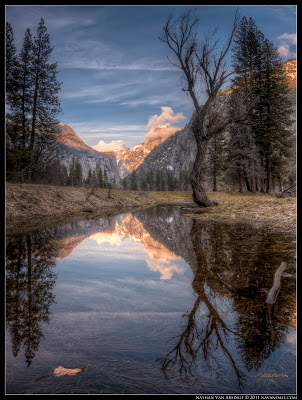 Ahwahnee
View of Tissayak (Half Dome) and North Dome from the Ahwahnee Meadows in Yosemite Valley.  The Paiute legend that I like (there are a few versions, and even some controversy over wheather it is a Paiute or a Miwok legend) states that a young girl and her husband were out from Mono Lake and were very thirsty when they entered Yosemite Valley.  The young girl was so thirsty that she drank up all the water in the valley, angering her husband to the point of beating her.  As she tried to run away she threw her basket at him, but then fell down and began to cry.  To punish them for bringing anger into a place of peace and beauty, the creator turned them into stone, the woman forever weeping: Tissayak.  Her Husband: North Dome.  Her Basket: Basket Dome. Her tears still streak the face of Half Dome.
Sometimes the scene is just too big for the lenses I have, so... I cheat.  This is an HDR-pano from 4 HDR images, arranged in quadrants.  Processed using Photomatix Pro's Batch Processing, and Photoshop CS4.  It's pretty easy to stitch pretty much any number of images together using photoshop's "Photomerge" option.  It only requires a little bit of foresight when capturing the images.  Make sure there's about 30% overlap per frame, and with just about any focal-length you can make grand panoramic stitches (as long as the "correct geometric distortion" box is checked).  Just make sure to shoot more than just the intended scene, as you will need to crop the slightly warped edges of the final product. 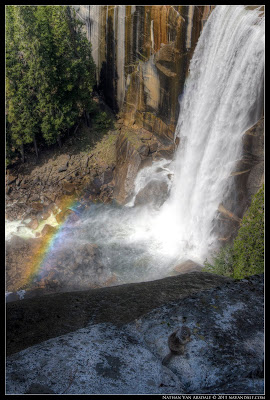 Lunch Munchin
On my hike up to Nevada Falls, I stopped to admire the beautiful rainbow created by the angle of the sun against the spray.  Apparently, I wasn't the only one enjoying the scene.  This little ground squirrel stayed still for the entire time it took me to consider the shot, wonder if the squirrel would stay put, and set up my tripod... about a minute and a half in all.  Then, as soon as I took my bracketed shots, the squirrel looked up at me and scurried off.
It's both cute and annoying how accustomed to humans some "wild" animals are.  Every National Park has signs posted on trails admonishing against feeding the wildlife.  Not only can the non-indigenous food cause myriad health problems for the animals, but the animals can most certainly cause health problems for humans.  These cute critters carry lice, ticks, fleas, other parasites, rabbies, and other diseases.  This squirrel was eating what looked like a torn of bit of a granola bar... probably no big deal... but before you know it, this squirrel will be dependent on handouts and be unable to fend for itself (...hmmm, is there a hidden socio-political statement in there).
Thanks for reading.  Be well! :-)
Posted by About Me at 11:09 AM No comments: