Through the Lens of Mortality 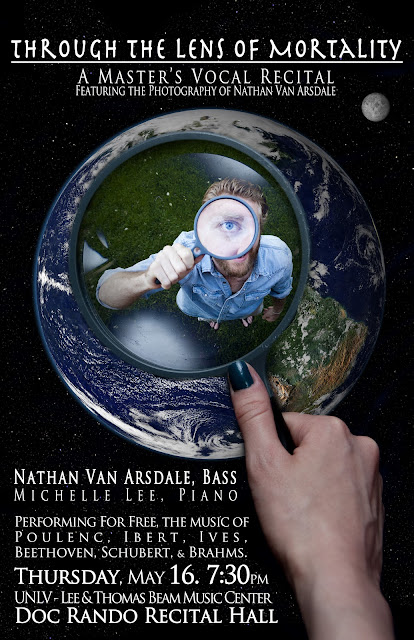 As my two years as a Master's student comes to an end, I am excited to present my Master's Vocal Recital Thursday, May 16, 2013, with my collaborative pianist, Michelle Lee.  During the recital I will be presenting a video featuring my photography (both time-lapse, and fine-art landscapes). I will have a reception with light refreshments afterwards.  The cost is free, but I am happy to accept donations in cash, check, or credit card.

Please help me save money and paper-waste by either printing these Program Notes and Translations ahead of time, or viewing them on your mobile device at the recital:
Read more »
Posted by About Me at 4:01 PM No comments:

I was recently flown to New York to sing in the premiere performance of Virko Baley's modern opera, "Holodomor: Red Earth. Hunger." starring John Duykers, Laura Bohn, and my voice teacher, Tod Fitzpatrick.  The performance at the Gerald Lynch Theater at the John Jay School of Criminal Justice was very well-received with a very nearly packed house.  It was such an honor to be able to share the stage with such amazingly talented musicians.  Most of my time in the city was spent rehearsing, but I was able to steal a few hours here and there to have fun with photos.

The sun was setting so far south, and I really wanted it in my composition, so I walked the short distance to the little park by the Brooklyn Bridge, and was rewarded with this lovely composition.

I had a limited amount of time to explore the city, due to an arduous rehearsal schedule.  The next time I was able to get out was the night before my performance.  My dear friends at the Metropolitan Opera were able to get me comp tickets to see Rigoletto that night, so I had to be at the Met by 7:00.  My rehearsal got out at 4:30... enough time?  The sun set was scheduled for 5:15, surely I had enough time to make it back to my hotel, grab my gear, and get to the top of the Rockefeller building.  There was, as expected, a bit of a line to get to the top.  I thought it was funny that normally when I chase sunsets it's through the wilderness, trying to get to an advantageous spot for compositions.  This time I was chasing the sunset, but rather than contending with wilderness, I was contending with civilization (my least favorite activity is waiting in lines).  I must say, 30 Rock is a pretty impressive place!  Lot's, and lot's of money went into this building!

The elevator ride up to the top was pretty cool... the ceiling of the lift was clear, and once the doors closed, the lights turned out and we could see up the shaft.  The shaft was lined with blue lights, and a neat video was projected on the clear ceiling, so the ride up looked like being launched on a raptor from a Battlestar.

Up top it was COLD!  and Windy!  Fortunately, I was prepared for both.  Unfortunately, I wasn't prepared for the dust and smog in the atmosphere.  My eyes could do little more than squint without watering uncontrollably.  I patiently waited for the other tourists to move away from the wall so I could set up my tripod, then I claimed my spot (in my opinion, the one decent spot for sunset photography on the whole roof due to obstructions everywhere else).  In between blinks and eye-rubs, I was able to capture a few bird's eye shots.

Not only was I able to enjoy a beautiful sunset from the top of the Rock, and watch the city come alive with lights, but I made it to the Met in time for the performance.  And what a wonderful production it was!  I am so grateful to have such wonderful friends and opportunities!

The next day was our performance of "Holodomor: Red Earth. Hunger."  It was fantastic!  The auditorium was packed, all of the musicians sounded wonderful!  It was really the best we'd sung since receiving the music three weeks earlier.  Afterwards we all celebrated.  A long-time friend of mine was able to attend the performance, so he joined us for the night too.  I chose not to drink too much, since I knew I had an early day the next day... but before I knew it it was nearly 3:30am, and I had so much energy.  So, I decided to take advantage of the opportunity, and I went on a little photo-walk.  There's nothing like walking through the streets of New York at 4:00am, because no one is out.  Where there would normally be crowds potentially tripping over my tripod, there was empty sidewalk.  So I was able to have some fun with compositions.

I managed to leave New York just before the huge snowstorm hit.  I've been back in Vegas now for over a month, incredibly busy with my Masters of Music studies.  Currently I'm performing as Dr. Dulcamara in Donizetti's Elixir of Love (March 15, 16, & 17 at UNLV).  I'm also slotted to perform at this year's Classical Singer Conference in Boston, in May, and will be performing with Sin City Opera at Vegas' Onyx Theater, too.  Soon I will have completed my studies, and will once again be able to visit more exquisite landscapes.  Until then, enjoy these Cityscapes, and be well! :-)