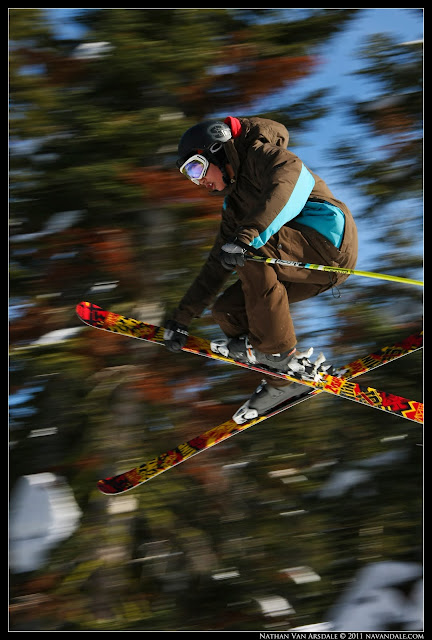 SierraAtTahoeSkiPhotography028, originally uploaded by navandale.
This is a fun photo from the 2011 season at Sierra at Tahoe, where I was a contract photographer through Flowskipix.
To get this image, I first set up my position on the corner of the knuckle (the rounded transition to the landing) so that I was not a hazard to anyone wanting to take the jump, but so that I could photograph people both coming towards me, and flying past me. It was a bright sunny day, and the sun was behind me to camera right. I could have easily set my camera to an open aperture (btw, I was using a Tamron 18-250 3.5-6.3 Macro Zoom

) and been able to freeze the action with a fast shutter-speed... 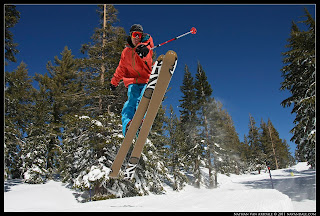 ...But anyone can do that... and I wanted to show a sense of movement. So, I cranked up my aperture to f14 (which allows me to worry a little less about focus) and slow my shutter-speed down to 1/125 at ISO 200 (I almost always shoot at ISO 200 in lieu of 100 when shooting people, because I enable highlight tone priority to maintain detail in the highlights). 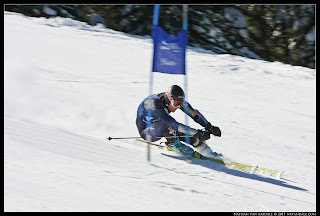 Aside from being able to ski every day, I love being able to capture people doing awesome things like it's nothing. In order for me to make a living (*ahem), it's in my best interest to capture their awesomeness in a unique, eye-catching, clear, focused, and flattering way. I've created a flickr set that features a few of my other favorite images from this year, where I've employed techniques such as longer shutter speeds, sequence shots, and high-speed panning to get my money-making shots. 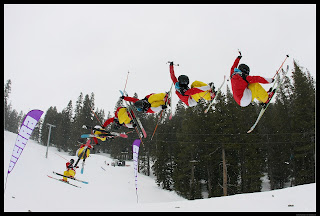 You may be thinking I'm crazy, that shooting moving objects at such a slow shutter speed will yield blurry images. Well, it depends. If I were to photograph a moving object coming towards or going away from me, a slow shutter-speed is a BAD IDEA...
...not as bad as skiing without a helmet! 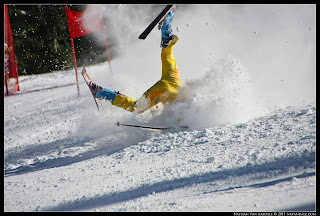 When the subject is moving parallel to me, I can pan with a slow shutter-speed, allowing the subject to be clear and in focus, and the background to be motion-blurred. Panning may take a little practice to get used to, and you will not always be successful, but it's a great way to make an action shot really come alive. 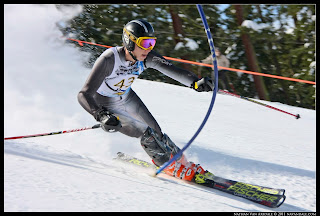 I've found that, depending on the speed of the subject, I can shoot at anywhere from 1/80-1/400 and achieve the desired blurry background and sharp subject. When panning, or shooting any moving subjects, have your camera set to AI Servo, and Full-Blast shooting (the icon with the "H" next to multiple frames).

Something to be aware of, however, is that if your subject is moving on any other axis in addition to their trajectory (i.e., if the bird's wings are flapping, the skier is spinning, etc.) those areas will not be as in focus with slower shutter-speeds.

I hope you enjoyed this tip, and have a great day!
Posted by About Me at 6:19 PM